Eukaryotic cell refers to a cell containing a eukaryotic cell (nucleus surrounded by a nuclear membrane). It has more than one chromosome and can undergo mitosis. It can also carry out protoplast flow and deformation movement. Photosynthesis and oxidative phosphorylation are carried out by chloroplasts and mitochondria, respectively. Except for cells of bacteria and cyanobacteria, all animal cells and plant cells are eukaryotic cells. Organisms composed of eukaryotic cells are called eukaryotes. In the nucleus of eukaryotic cells, DNA and histone proteins together form a chromosomal structure, and nucleoli can be seen in the nucleus. In the cytoplasmic inner membrane system is very developed, there are endoplasmic reticulum, Golgi, mitochondria and lysosomes and other organelles, which perform specific functions.

Eukaryotes include familiar plants and animals as well as tiny protozoa, unicellular algae, fungi, and mosses. Eukaryotic cells have one or more nuclei surrounded by double membranes. The genetic material is contained in the nuclei and exists in the form of chromosomes. The chromosome is composed of a small amount of histones and some basic proteins rich in arginine and lysine. Eukaryotes reproduce sexually and undergo mitosis.

Prokaryotic cells (prokaryotic cells) have no nuclear membrane, and the genetic material is concentrated in a low-electron density area with no clear boundaries, called nucleoids. DNA is a naked circular molecule, usually without binding protein, the diameter of the loop is about 2.5nm, and the circumference is about tens of nanometers. Most prokaryotes do not have a constant inner membrane system, and the ribosome is 70S type. The organisms composed of prokaryotic cells are called prokaryotes, and are all single-celled organisms.

Prokaryotic cell / prokaryotic cell refers to a cell that has no nuclear membrane and does not undergo mitosis, meiosis, or mitosis. This type of cell does not undergo protoplast flow, and amoeba-like movement is not observed. Flagella (flagellum) has a single structure. Photosynthesis and oxidative phosphorylation are carried out on the cell membrane. There is no differentiation of organelles such as chloroplast and mitochondrion, only ribosomes. Organisms composed of such cells are called prokaryotes, and they include all bacteria and cyanobacteria. That is, cells that constitute lower organisms such as bacteria and cyanobacteria. It does not have a true nucleus, only a pronucleus or quasi-nucleus. It contains a gene band (or chromosome), which is a circular double-stranded single-order deoxyribonucleic acid molecule (circular DNA), without histones and histones. The combination is nuclearless (nucleolus) and lacks a nuclear envelope. There are 70 S ribosomes and intermediates in the outer protoplasts, lacking Golgi (ER), endoplasmic reticulum (ER), mitochondria and centrosomes. Transcription and translation are carried out simultaneously, and the surrounding plasma membrane contains respiratory enzymes. There is no mitosis and meiosis. After the DNA has replicated, the cell divides into two.

Paleonuclear cells are also called archaebacteria (archaebacteria): it is a very special kind of bacteria, mostly living in extreme ecological environment. It has certain characteristics of prokaryotes, such as non-nuclear membrane and inner membrane system; it also has characteristics of eukaryotes, such as protein synthesis initiated by methionine, ribosome is not sensitive to chloramphenicol, RNA polymerase and true Similar to nuclear cells, DNA has introns and binds histones; in addition, it has characteristics that are different from prokaryotic cells and eukaryotic cells, such as: the lipid in the cell membrane is not saponifiable; the cell wall does not contain peptidoglycan , Some are mainly protein, some contain polysaccharides, some are similar to peptidoglycan, but do not contain muramic acid, D-amino acid and diaminopimelic acid.

Extreme thermophiles (themophiles): can grow in high temperature environment above 90 â„ƒ. For example, the archaebacteria discovered by Stanford University scientists has an optimal growth temperature of 100 â„ƒ, and it is inactivated below 80 â„ƒ. A group of archaebacteria found in the Italian seabed by the K. Stetter research group in Germany can live at 110 â„ƒ Among the above high temperatures, the optimal growth temperature is 98 â„ƒ, and the growth stops when it drops to 84 â„ƒ; JA Baross in the United States found that some bacteria isolated from the crater can live in a 250 â„ƒ environment. Thermophilic bacteria have a wide range of nutrients, mostly heterotrophic bacteria, many of which can oxidize sulfur to obtain energy.

Extreme halophilic bacteria (extremehalophiles): living in a high-salinity environment, the salinity can reach 25%, such as the Dead Sea and salt lakes.

Extreme acidophilic bacteria (acidophiles): can live in an environment with a pH value below 1, often also thermophilic bacteria, living in acid hot water in volcanic areas, can oxidize sulfur, sulfuric acid is excreted as metabolites.

Extremely alkaliphilic bacteria (alkaliphiles): most of them live in saline-alkali lakes or alkali lakes, alkali pools, and the living environment pH value can reach more than 11.5, and the optimal pH value is 8-10.

The cell wall of the extreme halophilic bacteria is composed of glycoproteins rich in acidic amino acids. The integrity of this cell wall structure is maintained by ionic bonds. A high Na + concentration is necessary for the binding between its cell wall protein subunits and maintaining the integrity of the cell structure. . After switching from a high-salt environment to a low-salt environment, on the one hand, the cell wall proteins depolymerize into protein monomers, causing the cell wall to lose integrity; on the other hand, the balance of ion concentration inside and outside the cell is broken, the cell absorbs water and swells, eventually causing the cell wall to break, bacteria The body is completely lysed.

Tolerate or require high salt concentrations in their living environment. For example, Halobacterium (a kind of halophilic bacteria) lives in salt lakes, salt fields and salty seawater. They can contaminate sea salt and cause the spoilage of salted fish and pickled animals. Because halophilic cells contain carotenoids, most colonies appear red, pink or orange-red. Carotenoids help protect them from strong sunlight in the environment. Sometimes the pollution caused by halophilic bacteria and certain algae turns the sea water into red.

Sourcing our impressive selection of colors and styles and find the perfect watch cardboard boxes to suit your needs!

and the watch 's inner tray,we will recommend cotton pouch for you ,or sponge foam tray. 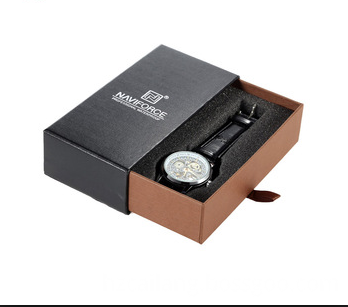